This work was awarded first prize in the 1961 International Competition for Harp Composition in the United States of America. Awarded by the Northern Californian Harpists Association.

PRELUDE
Early morning on the Seine. The sun shines and the surface of the water is only disturbed by swallows, dragonflies and a small boat. Cows graze in the meadows which lead down to the water. One hears only the joyous cries of swallows and the song of birds from the wood on the southern bank.

NOCTURNE
The countryside at Andé lies under the low and heavy clouds of a summer night - only the noise of the crickets disturbs the restless stillness. Suddenly, stars shining through a break in the clouds discover the Seine - moving silently and serenely through the night.

FIRE DANCE
A piece which evokes the exciting ritual dances of South America. The style of this dance was inspired by the sound of the little Paraguayan harp where the effects are usually simple but rhythmic impulse very strong.

These pieces may be performed separately.

The new Adlais engraving corrects a number of typesetting errors in the previous edition. 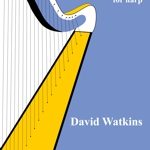 If you would like to contribute to this harp community project and help add to the information on this page, or feel that there has been an error with a submission, please contact us.